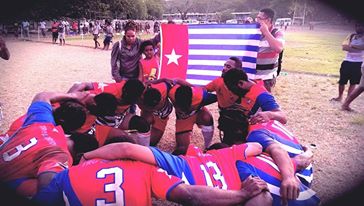 The Port Moresby based rugby league team, the West Papua Warriors are set to make history in January by being the first International Team representing West Papua and the freedom struggle. They will play their first international match in Brisbane, Australia against the Philippines national team, the Tamaraws.

The West Papua Warriors is a rugby league team made up of Papua New Guineans and West Papuans dedicated to promoting the West Papuan freedom struggle through sport.

Watch EMTV’s news report on the team below

“Team official, Richard Marjen, believes the team’s biggest strength is their passion for the West Papuan Cause. He says, unlike other rugby reams, the management has a different approach towards the players to keep them motivated.”

“Captain, Tala Kami, has appealed to the public that if they wish to sponsor their game next month, to contact the team on the ‘West Papua Warriors’ Facebook page or email westpapuawarriors@gmail.com”

We hope all our brothers and sisters in PNG as well as wantoks living in Australia will support the West Papua Warriors continuing to spread the #FreeWestPapua message in Brisbane on January 16th!