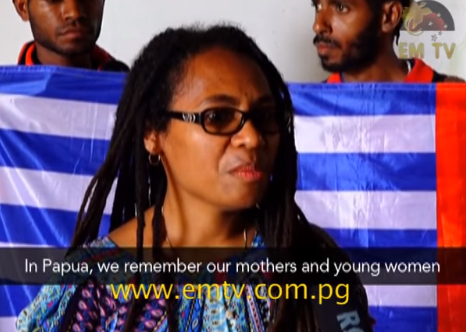 Yesterday marked International Human Rights Day and Free West Papua Campaign – Papua New Guinea organised a Free West Papua march to Boroko, ending up in the EMTV Studios. West Papuans from FWPC PNG were interviewed about the rights of our people, including for the more than 10,000 West Papuan refugees currently living in PNG.

Along with other West Papuans, Free West Papua Campaign Coordinator, Mr Fred Mambrasar said “As I’m speaking I don’t know what my status is. The talk about refugee status in PNG is all about the refugee centre in Manus. What about us?”

According to the Government Immigration Department, over 2700 West Papuan refugees have been interviewed for PNG citizenship and out of this, the first bat

“In Papua, we remember our mothers and young women who have been killed raped and abused.”

We continue to appeal for advocacy and investigation about West Papua from the media in PNG, as well as the government, civil society and most importantly, all our wantoks and brothers and sisters, the people of Papua New Guinea.

We walk down the long road to freedom together! #FreeWestPapua! #WanGiraun